A PROJECT OF THE INSTITUTE FOR WAR & PEACE REPORTING

There is no exact data available on the emergence of Orthodoxy in southern Kyrgyzstan. However, according to Ekaterina Ozmitel, doctor of historical sciences, a small Orthodox community in Jalal-Abad region first appeared in the 1930s.  It gave shelter to priests, nuns and believers from Russia and Kazakhstan, who were persecuted by the Soviet government.
END_OF_DOCUMENT_TOKEN_TO_BE_REPLACED

Exchange of Tourists via Caspian Sea: Challenges and Prospects

The countries of Central Asia and South Caucasus don’t count on each other in terms of tourism and are pursuing a more aggressive campaign promoting their countries in non-CIS countries.

END_OF_DOCUMENT_TOKEN_TO_BE_REPLACED

Every third child in Kyrgyzstan lives in poverty and their number is rising every year.

END_OF_DOCUMENT_TOKEN_TO_BE_REPLACED

“Scripture People.” The Life of Adventists in Kyrgyzstan

Kyrgyzstan has 23 communities of the Seventh-Day Adventist Church, 6 of which are located in Bishkek. The main prayer house is located on the outskirts of the city and is the spiritual centre of Adventists in the republic.
END_OF_DOCUMENT_TOKEN_TO_BE_REPLACED

The topic of uranium mining has become a serious concern for the people of Kyrgyzstan. Yesterday, local residents protested together in Balykchy against the uranium mining, and today they were protesting in Bishkek. The people are very critical about this topic.

END_OF_DOCUMENT_TOKEN_TO_BE_REPLACED

According to experts, the Parliamentary Assembly of Turkic-Speaking Countries works only nominally and the reason is in officials who don’t raise relevant issues and don’t solve real problems.

END_OF_DOCUMENT_TOKEN_TO_BE_REPLACED

On Both Sides of the Kyrgyz-Tajik Border: A Manifesto and the Same Dreams

A month has passed since the clash between the residents of the Aksai village (Kyrgyzstan) and Vorukh exclave (Tajikistan), but people on both sides of the border still live with anxiety. On April 4-6, in Dushanbe, the government delegations of the two countries held a meeting on the delimitation and demarcation of the state border. However, it is not clear which decisions were made at this meeting.

END_OF_DOCUMENT_TOKEN_TO_BE_REPLACED

How Kyrgyzstan Will Implement UN Convention on the Rights of Persons with Disabilities?

Kyrgyzstan has allocated 6.6 billion soms or nearly 94.5 million dollars to implement its obligations under the UN Convention on the Rights of Persons with Disabilities. The amount seems huge, but given the 10-year period of implementation and the whole country, the experts think it won’t be enough even to develop relevant infrastructure.

END_OF_DOCUMENT_TOKEN_TO_BE_REPLACED

Life of Lutherans in Kyrgyzstan: From Misunderstanding to Tolerance

Lutheranism is one of the first movements in Protestantism. Despite its considerable, almost five centuries, age, it is probably one of the Christian religions most unknown to general public in Kyrgyzstan.

*This publication was prepared as a series of cabar.asia articles dedicated to raising awareness on religious diversity in Central Asian countries. The authors do not seek to promote any religion.

The core of Kyrgyz Lutherans consists of Germans removed during the Second World War. The initial communities of Evangelical Lutherans appeared in Kyrgyzstan back in 1999. Today Kyrgyzstan has about 15 functioning Lutheran churches. One of them is the Concordia Church located in the suburbs of Bishkek. It is the first officially created and registered Lutheran church in Kyrgyzstan. It occurred in 2003.

The Lutheran church is headed by bishop Kenzhebek Botobaev, who had been interior affairs officer for 15 years:

“My first education is secular. First I graduated from the Zh.Balasagyn National University majoring in Finances and Credit. Then I entered the Seminary in Bishkek. In 2007, I was given the rank of pastor, and two years later, in 2009, the rank of bishop. This is when I started serving the church.”

In addition to the church in Bishkek, there are other branch offices in Chui region: in Kara Balta, Panfilovka, Petrovka and Kemin. However, they have small parishes – 10-15 people.

There was a small church at Issyk Kul in Aksu district, but it was closed due to lack of people.

According to modest estimates, Kyrgyzstan has about 600 Lutherans. The city church is full on Christmas services and during the Easter, and up to 25 parishioners attend the church on Sundays. The church is open to everyone regardless of ethnicity or religion.

“Some attend our church regularly; others are scared to do the same. Instead, they invite us to their houses to read prayers.”

There were nearly 200 thousand Lutherans in Kyrgyzstan originally. Now we don’t know the precise number. After the breakup of the Soviet Union, Germany opened borders to ethnic Germans. The number of ethnic Germans who left Kyrgyzstan reached two hundred thousand,” Botobaev said.

Osmon Kachkynchiev is 51 years old. He became Lutheran 15 years ago, and now is the pastor of the Evangelical Lutheran church in Kemin, Chui region.

— It was through pastors who came to Kyrgyzstan from the United States that I learned about the Lutheranism. At first, it was a mere interest, I took the Bible and studied what it said. Afterwards, I continued studying at the church.

I studied for seven years in a religious institution and then I became a pastor in the church. I believe the God has called me to follow this path.

There are about 10 Lutherans in Kemin, including two Kyrgyz and one Turkish woman. The majority of them are elderly people. There used to be many of them in the past, but some have moved to the capital, some have died.

My relatives took my decision quietly. At first, we used to have disputes because my father and my younger brother were imams in different mosques. It made no sense for them. But over time they supported me by saying, “A man is known by his actions and good deeds, not religion.”

There are no critical differences or inconsistencies between the Islam and Lutheranism. Religious denomination is a delicate thing. We follow the same sacred writings as are referred to in the Quran and Bible. But some people find it hard to understand.

I have buried my relatives according to Islamic traditions and also performed the last rites instead of the priest. As to the funeral procession, there were some conflicts in the past. Local people could stand against the burial, for example, in the Islamic cemetery. However, it never caused serious confrontation.

Nevertheless, we often raise the issue of dividing the cemetery into separate sections for every religion to avoid unwanted conflicts.

“We’ve been blamed for apostasy”

According to the head of the church, Kenzhebek Botobaev, it was hard to co-exist with the local population since the creation of communities:

— There used to be persecution, rejection. Once we were in Yssyk Ata village, and nearly a hundred local people gathered there and were willing to kill us. Later on, those people filed a report to the prosecutor’s office, where we interrogated repeatedly. However, neither we, nor law enforcement bodies could understand the reason.

As for me, I became a Lutheran after my wife and thanks to the prayers of past pastors, who were missionaries here, Timothy Nickle, Bob Fial.

I didn’t even want to listen about the Lutheranism in the first days. I kicked preaching pastors out from my house and threw stones at their back. I didn’t associate myself with any religion. I didn’t attend the mosque, I didn’t pray. Nevertheless, it was disgusting for me to think about attending a church.

But gradually, thanks to prayers and teachings of pastors, I became a Lutheran and started to attend the church. I understood that I did few good things in this world and I repented. It was hard. It was hard to accept the fact that all turned their back on us – relatives, friends, society.

Continuous gossips behind our back were a regular thing. We didn’t contact our relatives for six years. They thought I betrayed my religion. And they deemed my religion was Islam only because I was a Kyrgyz. But ethnicity and religion are absolutely different things. I observe all of our traditions and customs, and also I trust in God and attend the church. However, it’s difficult to explain to people.

We couldn’t come out of our house and our children couldn’t attend school because of oppression. We were blamed for apostasy at state meetings. Now it feels much better if we ignore very rare conflicts. Mainly, it happened due to the State Agency for Religious Affairs. We gather together and discuss relevant issues for the second year in a row.

“Requirements to pastors are very high”

The common prayer in the church is held in two languages – Kyrgyz and Russian. Russian-speaking parishioners are received by pastor Mansur Kurmanbakeyev:

— I was born in Novosibirsk. My late father was a military engineer and was sent to Kyrgyzstan to a computer plant. We were provided with an apartment to live. Here I graduated from the polytechnic university and it happened so that I buried both mother and father in the same year.

My friend of German ethnicity was beside me those days. When he saw my situation, he took me to the Lutheran church. Afterwards, I started to help a local pastor. After a while, he suggested that I should go to Novosibirsk to get a degree in a religious institution. After five years of study, I returned to Kyrgyzstan and it’s been 13 years since I became a pastor.

By the way, requirements to pastors are very high. In addition to a religious education, you must have life experience. You should be married and have at least one child. People of different ages come to make their confessions to me and I must know what to talk about with them. Language skills are a mandatory requirement. We read Old Testament in original – in the old Hebrew script, New Testament in original – in the ancient Greek. Knowledge of languages help us explain difficult writings to people. 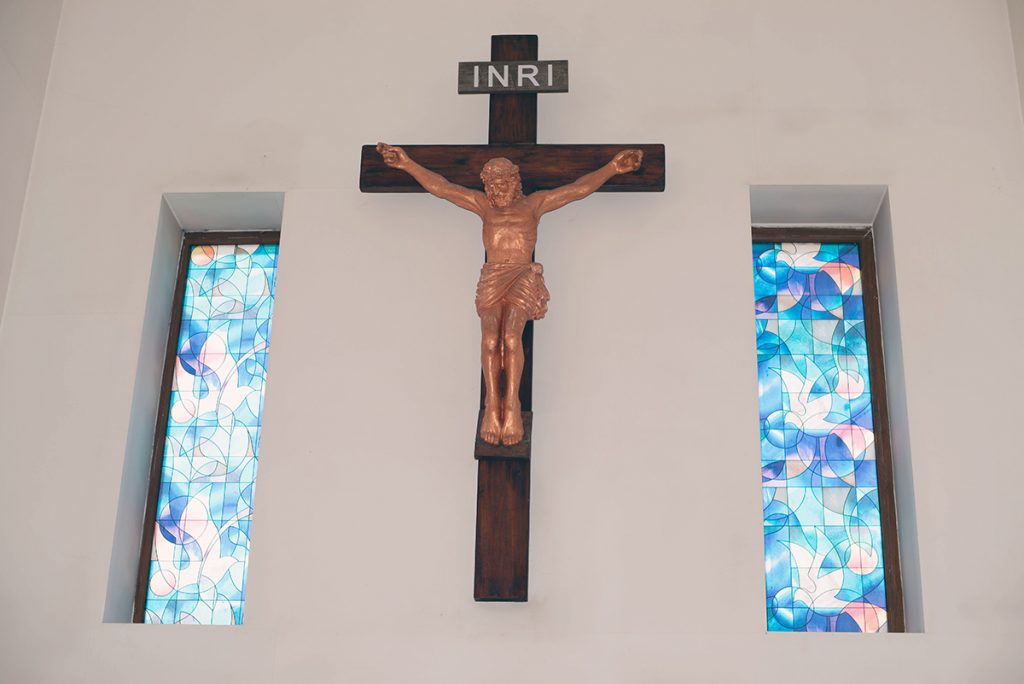 Easter services are starting soon in all Lutheran churches. The traditions of the Lutheran Easter are much like Easter traditions of Catholics and Orthodox Christians. However, the dates vary: the Lutherans celebrate Easter on April 21, according to the Julian calendar. The orthodox Christians are celebrating the Resurrection of Christ on April 28, 2019. So, the difference between these dates is one week. However, it can reach one and a half months. Catholic Easter is usually celebrated first, and Orthodox Easter is celebrated afterwards.

Currently, the Lutherans are fasting for 40 days. It’s time to repent, reflect and pray.

The Road of Contention. The Authorities of Kyrgyzstan and Tajikistan Begin Negotiations After a Border Conflict

Since March 13, the confrontation between the residents of Aksai village (Kyrgyzstan) and Vorukh exclave (Tajikistan) is still ongoing. There are wounded on both sides, the Tajik media report of two dead.
END_OF_DOCUMENT_TOKEN_TO_BE_REPLACED

Photo essay: Dushanbe at night
“Protection of interests of the state: land funds management problems of Kyrgyz Republic”
“Regulation of the land issues in Bishkek: legislation and its practice”

IWPR Kyrgyzstan is LOOKING for a Communications INTERN

IWPR Kyrgyzstan is currently looking for a highly motivated and organized young individual for the position of the Communications Intern. We are seeking an ambitious and creative person who..

CABAR.asia 02.05.18
IWPR and OSCE Academy in Bishkek To Enhance Capacity of Young Experts in Central Asia

The Institute for War and Peace Reporting (IWPR) and OSCE Academy in Bishkek launch the three-year project to enhance the capacity of the new generation of analysts and journalists in Centra..

The IWPR representative office in Tajikistan selected best journalistic materials covering the struggle against radicalism in Tajikistan in 2017...